Officers were dispatched to Walmart, the potato chip aisle, for a disturbance between two women.

Upon arrival, officers learned one woman had a protection order out against the other, stemming from an incident(s) from when the two resided in the same duplex in University Heights.

When the two made eye contact with one another, the protected party was confronted by the other woman, who threatened to “beat her ass” as well as her 7-year-old daughter.

The woman pulled down her COVID-19 mask and attempted to spit at her. When she missed, she entered the other woman’s shopping cart and struck her in the face with a 10-pound log of prepackaged meat.

Officers arrested the 25-year-old Cleveland woman and charged her with Assault and Violating a Temporary Protection Order.

When arrested, her 5-year-old child was turned over to another family member.

A criminal history check revealed a history of violent behavior and multiple warrants out for her arrest.

It is unknown as to what initially led to the beef between the two women.

The Figurehead of the Free World has spoken. Give us a hug…if you’ve been vaccinated. (Wait, we weren’t supposed to hug before?! Ooops. We’re huggers. Sorry!!!)

Mask Thoughts From The Peanut Gallery 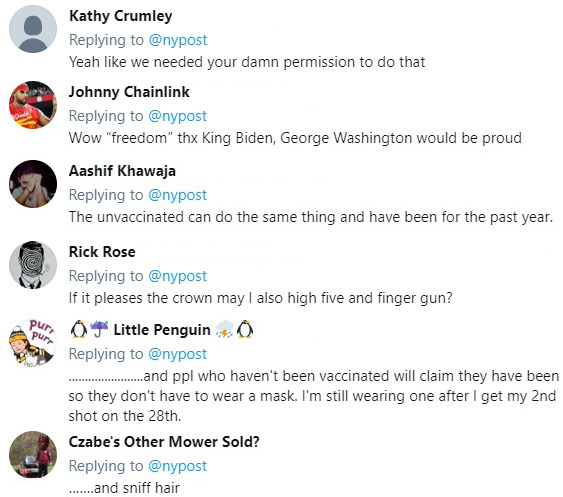 Joining in with those who have been doing things all along, maskless, the CDC awards people vaccinated against Covid-19 by removing their mask requirements, indoors and outdoors. Welcome back, friends! The air is refreshing!

“If you are fully vaccinated, you can start doing the things that you had stopped doing because of the pandemic,” Dr. Rochelle Walensky said during a White House Covid-19 briefing. “We have all longed for this moment when we can get back to some sense of normalcy.”

Read this at CNN

MGM made the announcement Wednesday morning after approval from the Nevada Gaming Control Board. The following properties will move its gaming floors to 100% capacity with no social distancing requirements:

Read this at FOX5 Vegas