The researchers point to humanity’s record of moving species to new environments on Earth, where those organisms can become invasive and harm the native species; they say such behavior suggests the same could happen with alien life from another planet contaminating Earth and vice versa, according to the paper, published Nov. 17 in the journal BioScience.

“The search of life beyond our world is an exciting endeavour that could yield an enormous discovery in the not-too-distant future,” lead author Anthony Ricciardi, a professor of invasion biology at McGill University in Montreal, told Live Science in an email. “However, in the face of increasing space missions (including those intended to return samples to Earth), it is crucial to reduce the risks of biological contamination in both directions.”

Read this at Live Science

1. Vaccination does not necessarily prevent infection. (It may reduce symptoms.)

2. You can be “vaccinated” and still spread the disease. So there is no such thing as a “vaccine refuser being dangerous to others.”

3. There is no social benefit to the government mandating the shot other than fewer individuals getting sick (medical costs).

By Dr. Dannielle (Dossy) Blumenthal. All opinions are the author’s own. Public domain.

Read this at Dannielle Blumenthal, Ph.D.

Solar storm 2021: There is another solar storm coming, and the Internet, which is the backbone of almost every activity that happens in the world today, be it governance, medicine, manufacturing, banking or even education, is under threat again. A new report on solar storm impact suggests that a massive upcoming solar storm is likely to damage the infrastructure and in the process cause a massive internet apocalypse.

According to a research paper published by Sangeetha Abdu Jyothi of the University of California, Irvine and VMware Research, a Coronal Mass Ejection (CME), popularly known as a solar storm, is a directional ejection of a large mass of highly magnetized particles from the sun. When the earth is in the direct path of a solar storm, these magnetized and charged solar particles will interact with the earth’s magnetic field and produce several effects, which includes damaging long-distance cables that constitute the backbone of the Internet.

Read this at Tech HindustanTimes

Periodical cicadas known as Brood X have invaded the New Jersey town that was the site of the Martian landing in the famous sci-fi drama, “The War of the Worlds.”

The noisy, red-eyed insects have been plotting their takeover for 17 years in the soil of Van Nest Park in Grovers Mill.

Excellent! That sure beats murder hornets and actual aliens! 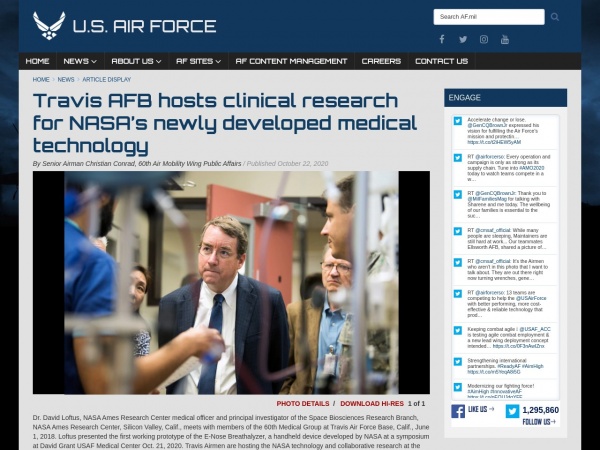 The E-Nose Breathanalyzer, under development at NASA’s Ames Research Center in Silicon Valley, will have the capability of analyzing compounds found within a person’s breath to diagnose a battery of illnesses and abnormalities including respiratory illnesses, infectious diseases, and cardiovascular conditions.

Read this at U.S. Air Force

Read this at Reuters