A 79-year-old woman was seriously injured Friday night after a moose stomped her in a Glenwood Springs, Colorado, yard while she walked a dog on a leash.

The woman, who has not been identified publicly, told Colorado Parks & Wildlife that she was dog-sitting at the residence and saw the mother moose and two calves in the front yard earlier in the day.

Georgia Reed, 14, and Kiley Holman, 13, who live near Weatherly, Pennsylvania, got quite the surprise visitor while on a ride at Morey’s Piers in Wildwood, New Jersey earlier this month.

Georgia was celebrating her 14th birthday while on vacation and decided to go on the SpringShot ride at the amusement park.

Video shows the two teenagers get fired into the air and then, shockingly, Kiley comes face-to-face with a seagull.

“When I got shot up, then I saw it. It was going the opposite way and then it came back and hit me right in the face,” Kiley said. “It felt really light and it only left like the tiniest scratch.”

Kiley was able to remove the bird and it seemingly flew away uninjured.

Read this at ABC 7 Chicago 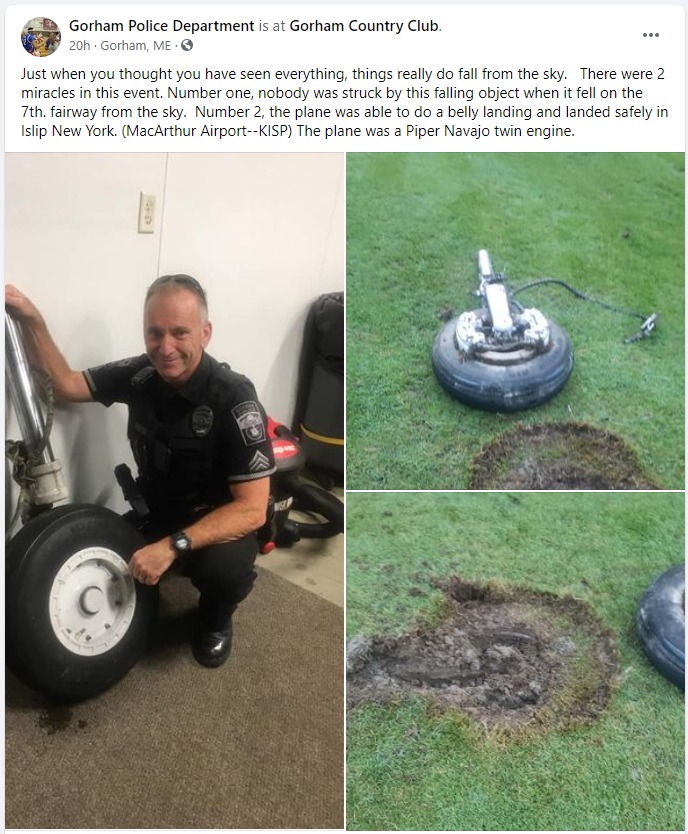 Just when you thought you have seen everything, things really do fall from the sky.

There were 2 miracles in this event.

Number one, nobody was struck by this falling object when it fell on the 7th fairway from the sky.

Number 2, the plane was able to do a belly landing and landed safely in Islip New York. (MacArthur Airport–KISP)

The plane was a Piper Navajo twin-engine.

A liquor-loving macaque broke into a bottle shop in Madhya Pradesh, India, this week and brazenly drank a bottle of Kahlua in front of the shop’s owner.

So far, Animal Control has successfully caught eight of the originally 12 escaped dogs, and are hoping the “strange environment” will make them fearful enough to walk into one of the traps, Orange County Animal Services spokeswoman Tenille Fox said.

Forty-eight people have been charged after a ‘Redneck Rave‘ in Kentucky descended into chaos as one man had his throat slit, a woman was choked in a fight over a blanket and another man became impaled on a log.

Dozens of attendees were charged with a range of offenses from drug trafficking to felony assault.

Some were left seriously injured as grisly scenes unfolded at what organizers billed as ‘America’s wildest and craziest country party’.

Of the more violent incidents, one man had his throat slit by a friend after a drunken fight.

Read this at Daily Mail

The FDA has warned us, “don’t eat cicadas if you’re allergic to seafood as these insects share a family relation to shrimp and lobsters.”

As a fan of the show Bizarre Foods with Andrew Zimmern, I was already aware of this, but in talking to people in the past week, it would seem that I am one of the few people who stored that bit of info away for when the SHTF one day. So now you know.

Don't eat #cicadas if you're allergic to seafood as these insects share a family relation to shrimp and lobsters. https://t.co/UBg7CwrObN pic.twitter.com/3qn7czNg53

Read this at FDA